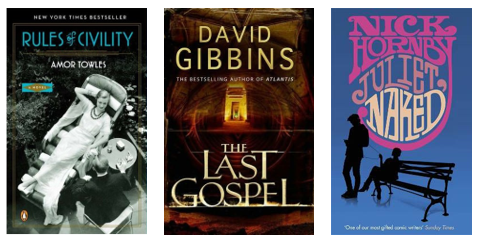 Rules of Civility by A. Towles

On the last night of 1937, 25 year-old Katey Kontent is in a second-rate Greenwich Village jazz bar when Tinker Grey, a handsome banker, happens to sit at the neighboring table.

This chance encounter will propel her toward the upper echelons of the New York society - where she will have little to rely upon other than a bracing wit and her own brand of cool nerves.


The Last Gospel by D. Gibbins

What if, one of the Ancient World's greatest libraries was burid in volcanic ashes and then rediscovered 2000 years later?

What if, what was found there was a document that could shatter the very foundations of the western world?

What if, you were the one who discovered this secret and were then forced to confront terrifying enemies determined to destroy you to ensure it goes no further?

Annie and Duncan fit together naturally, like jigsaw pièces, though Duncan's passionate obsession with Tucker Crowe - a reclusive and tortured-genius songwriter who vanished in mysterious circumstances- has never let much time to deal with serious topics such marriage or children.

Tired of her relationship and her dull job in a bleak town, Annie Wonder whether she would quit it all.

One day, Tucker's record company releases a stripped-down version of the songwriter's songs that enthuse Duncan but not Annie who decides to jilt him.

Later she writes her bad opinion about the song on a fan website and is very surprised that Tucker himself replies and agrees with Annie. The latter will try and find what happened to Tucker to be silent for so long...

Interview for Waterson with N. Horby about his novel Juliet, Naked.