David Barradell is currently the owner of a camp site at Hourtin in the Medoc, where he enjoys the local environment of lakes, beaches and the forest.He has been known to have the odd glass (or two) of Rosé with the clients. 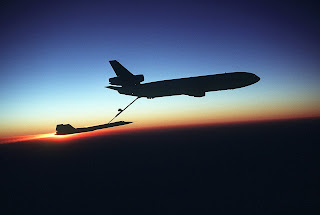 In a previous life he was a Navigator with the Royal Air Force ( note: NOT the British Royal Air Force - there was no need to designate it as such in 1918 as it was the only one at the time). He joined straight from school and served for 50 years in Regular and Reserve service. For  most of that time he was engaged in Air to Air Refuelling Operations, which will be the subject of his presentation.