discover our selection of books of the month. The books are on display in the foyer of BDX-USA. 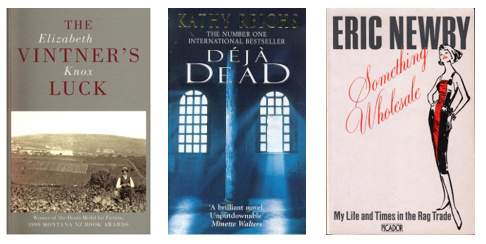 The Vinter's Luck by E. Knox

One summer night in 1808, Sobran Jodeau sets out to drown his love sorrows in his family's vineyard when he stumbles on an angel. Once he gets over his shock, Sobran decides that Xas, the male angel, is his guardian sent to counsel him on everything from marriage to wine production. But what if Xas turns out to be less holy then it appears.

The bones of a woman are discovered in the grounds of an abandoned monasteryand the case is given to Dr Temperance Brennan (yes, she's the one played by E. Deschanel in Bones).

Researching recent disappearances in the city convinces Brennan that a serial killer is at work, despite the deep cynicism of detective Claudel (yes it sounds French as the story take place in Québec). And yet the body count has begun...

Something Wholesale by E. Newby

It is a hilarious and splendidly macabre account of the confusion and disorder that was his life apprenticed to the family firm of Lane and Newby. It is also an affectionate portrait of his father, a deightly eccentric who spent most of his life averting or actively participating in disasters.
Besides, it relates the writer's adventures during the years he spent as a commercial traveller in the improbable trade of Haute Couture.