Here's the selection of books of the month. They are on display in the foyer of BDX-USA. 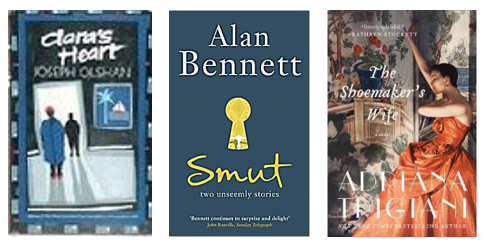 
Clara is a poweful black woman brought from Jamaica to Long Island to run the household after David's mother has a breakdown following the death of her baby daughter. Clara is rough but loving, and she introduces David to a world richly textured with legend and magic.

He leanrs her patois and becomes an honorary members of her social circle, mainly consisting of the ladies of Blanche's Beauty Parlour in Brooklyn.

As David's mother grows odder and his father moe distant, so David clings the more to Clara- with the inevitable unhappy conséquences

The shoemaker's wife by A. Trigiani

The fateful first meeting of Enza and Ciro take splace amid the huanting majesty of the Italian Alps in the early 20th century. Still teenagers, they are separated when Ciro is banished from his village and sent to hide in NYC's Little Italy, apprencticed to shoemaker, leaving a bereft Enza behind.

However, she, too, is forced to go to the USA and destiny reunites them but separates them almost immediately as Ciro is sent to fight in WW1.

Also, Enza becomes involved in the world of the opera...