here is the selection of books of the month. They are in display in the foyer of BDX-USA. 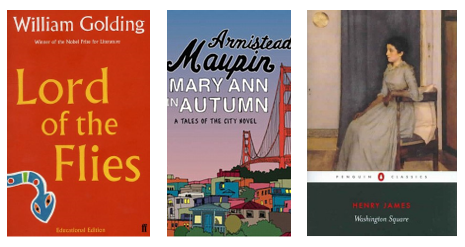 Lord of the Flies by W. Golding

A plane crashes on a sesert island and the only survivors, a group of schoolboys, assemble on the beach and wait to be rescued. By day they inhabit a land of bright fantastic birds and dark blue seas, but at night their dreams are haunted by the image of a terrifying beast.

As the boys' delicate sense of order fades, so their childish dreams are transformed into something more primitive, and their behavior starts to take on a murderous, savage significance.

Mary Ann in Autumn by A. Maupin

Twenty years have passed since Mary Ann Singleton left her husband and child in San Francisco to pursue her dream of a television career in New York. Now, a pair of personal calamities has driven her back to the city of her youth and into the arms of her oldest friend, Mickael 'Mouse" Tolliver, a gay garderner happily ensconced with his much-younger husband.

She taks stock of her mistakes and soon with the help of Facebook and a few old friends, she begins to re-engage with life, only to confront fresh terror when her spackled past comes back to haunt her in a way she could never have imagined.

When timid and plain Catherine Sloper acquires a dashing and determined suitor, her father, convinced that the young man is Nothing more than a fortune-hunter, decides to put a stop to their romance.She is thus torn between a desire to win her father's approval and passion for the first man who ever declared his love to her.

James interweaves the public and private facs of 19th century New York society and also portrays an innocent woman becoming all too aware of the restrictions that others seek to place on her freedom.