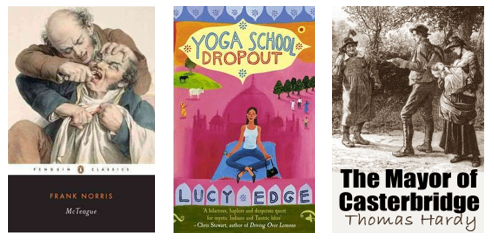 This searing portrait of a slow-witted dentist and his avaricious wife embodies American writer Frank Norris's powerful insights into conflicting forces of hereditary and social conditioning. It is a novel of compelling narrative force, resounding with a sense of life as epic.

McTeague - written à la Zola, the source of inspiration of Norris- is a central statement of evolutionary awareness in late 19th century America and a best representative of the school of writers including S. Crane and T. Dreiser.

After a decade spent working and drinking too much in the world of advertizing, Lucy decided to search a more meaningful way of life.

Her goal was to find a guru, strip away from her ego and become and kind of Yoga Goddess. But things don't turn out as one wishes...

Obsessed with self-perfection rather shallower than expected, she 'll though fall in love with India and things more interesting than becoming the new Christy Turlington may happen.

The Mayor of Casterbridge by T. Hardy

Henchard does not despise fame, wealth and social success. Ridden by violent passions he sells his wife and child to a sailor at a fair. In the subsequent year, thanks to his energy and hard work he rises to become the rich and respected mayor of Casterbridge.

However, the sudden reappearence of his wife and her daughter sets off unsurprisingly a train of events which gradually undermine Henchard's power and reputation.