discover the books of the month. They are displayed in the foyer of BDX-USA. 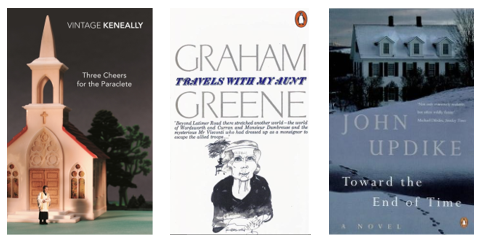 Three cheers for the Paraclete by T. Keneally

From the moment he allows his young cousin and bride to spend the night in his room, Father Maitland causes raised eyebrows and dark mutterings amongst the brothers at St Peter's. Time and again his efforts to do the right thing for his fellow men lead him into conflict with his superiors and the immutable laws of the church - a conflict which ultimately threatens to destroy him both as a priest and as a man. Thomas Keneally's darkly satirical novel, which won him his second successive Miles Franklin Award resounds with intellect and humour.

The novel begins when Henry Pulling, a conventional and uncharming bank manager who has taken early retirement, meets his septuagenarian Aunt Augusta for the first time in over fifty years at his mother's funeral. Despite having little in common, they form a bond. On their first meeting, Augusta tells Henry that his mother was not truly his mother and we learn that Henry's father has been dead for more than 40 years.
As they leave the funeral, Henry goes to Augusta's house and meets her lover Wordsworth – a man from Sierra Leone. Henry finds himself drawn into Aunt Augusta's world of travel, adventure, romance and absence of qualm.


Toward the End of Time by J. Updike

Set in New England, like many of Updike's novels, Toward the End of Time portrays a world in which the Chinese and the Americans have attacked one another with nuclear weapons. The aftermath is shown through retired investment advisor Ben Turnbull's journal. Though the dollar and the central government are gone, life in Boston and the surrounding areas goes on thanks to FedEx and other less reputable entrepreneurs. The book is divided into five parts: i. The Deer ii. The Dollhouse iii. The Deal iv. The Deaths v. The Dahlia.