come and join us to discus Children Act written by Ian McEwan. The British author was nicknamed "Ian Macabre" after the publication of his first two Gothic short stories (The Cement Garden and the Comfort of Strangers). Later he won the Man Booker Prize with Amsterdam in 1998.

Two of his novels were adapted for the cinema: Enduring Love and more recently Atonement, starring Keira Knightley. 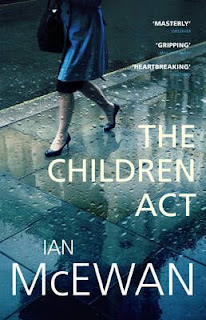 Children Act (2014) deals with Fiona Maye, a High Court judge presiding over family division. Though happy in her career, she faces a marriage crisis and regrets her childnesslees.

One day she has to decide if she must force Adam, a beautiful 17 year-old boy, to take his treatment despite his religion belief or on the contrary, let him decide what he thinks is best for him.

This case will have a strong impact on both Fiona's and Adam's lives.

NB: no need to have read the book to join us.