Join us for the second installment of our discussion about Les Bandes Dessinées. Concetta and Lloyd will lead a discussion about "Comics and Their Impact on Society & Our Lives". We invite you to bring along memories about your favorite comics (before & now) and even some of your collection to share. Here's a little food for thought to get you started: 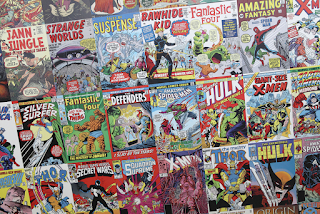 "As with its predecessors the political cartoon and newspaper comic strip, the comic book can provide an intriguing, entertaining, and sometimes critical mirror of society. Through the decades of the last century and into our own, comic books have influenced culture as well as reflected it. Now an ingrained part of our cultural lexicon, the characters, conventions, art, and even language of comic books are everywhere including advertising, politics, and entertainment, in addition to being the subject of a growing field of scholarship. From their humble beginnings as reprints of comic strips, comic books have matured into works of art, literature and cultural significance in their own right." ~ from "Comics & Culture" The University of Iowa Libraries.