here is the movie selection of the month. They are on display in the foyer of BDX-USA. 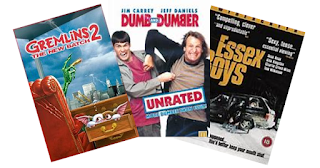 As with the first film, Gremlins 2: The New Batch is a live action horror comedy film; however, Dante put effort into taking the sequel in new anarchistic directions. The film is meant to be more cartoon-like and less dark than the original, and the violence is fairly slapstick. There are also a number of parodies of other films and stories, most notably Gremlins itself, as well as the Rambo films, The Wizard of Oz, Marathon Man and the Phantom of the Opera.


Dumb and Dumber is a 1994 American comedy film directed by Peter Farelly  who co-wrote the screenplay with Bobby Farelly  and Bennett Yellin. Starring Jim Carrey and Jeff Daniels, it tells the story of Lloyd Christmas (Carrey) and Harry Dunne (Daniels), two dumb but well-meaning friends from Providence, RHode Island, who set out on a cross-country trip to Aspen Colorado , to return a briefcase full of money to its owner, thinking it was abandoned as a mistake but was actually left as ransom money.

This film starts off as a young taxi driver is offered a job to help a small-time hardman get a little revenge. As the film progresses, he gets money and he thinks he is gaining respect from the other gang members. Then there comes a time where he is woken at night, only to find a Range Rover outside his house: his boss is expecting him to drive this to pick up the rest of the gang and take them to their awaiting fate...