Dan Hall studied international trade in Thunderbird and International Relations at William and Mary University (VA).
He then became a consul and worked in Poland, Benin, Russia and at the Department of the European and Eurasian State Affairs in Washigton.
In Warsaw, he took part ot the Peace Corp.
In addition to English, he speaks French, Polisha dn Russian.
He has been consul of the USA in Nouvelle Aquitaine since August 2017. 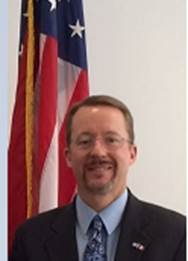 The consul's mission is to explain American politics, society and culture.
He also helps the American companies to enter the French market. Indeed, the main goal of the consulate is to strenghten the links between Frnahc and American economies, especially regarding aeronautics and defense, electronic components, agriculture, food industry and wine, chemistry and pharmaceutical industry, biotechnology and tourism.