Chester Bomar Himes was an American author whose most famous work is the Harlem Detective series. He started writing social books to denounce poverty and racism in the USA (he was born in 1909) but he wouldn't meet success.

After a stay in... Arcachon, Himes took the oportunity to question his career and way of life and so he started to write crime novels.

They became quickly popular and thanks to his stories he could tell  a large audience what he thought was wrong in the American society without detering readers with an agressive style one could find in his earlier works.

Enjoy the novels by Himes you can find in the BDX-USA library. 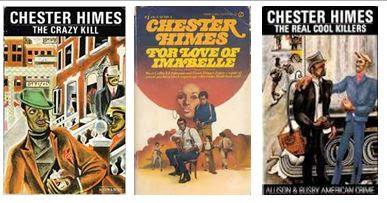 The plot of The real cool killers concerns the murder of Ulysses Galen, who was found dead in one of the streets of Harlem. Detectives Grave Digger Jones and Coffin Ed Johnson must investigate the murder and follow up various leads as to who might have had a reason to kill Galen.
The book was originally published in French under the title Il pleut des coups durs.

Firstly entitled Rage in Harlem, For Love of Imabelle deals with a bunch of ad boys and dirty money.
Goldy's thing was selling religion and shooting up dope... Jackson thing was fast money any way he could get it... Jodie's thing was using his razor any time he got annoyed... and all of their thing was being first to open trunk full of gold at the end of a trail of blood... and as for love of Imabelle, her thing was to give "her pearly white smile of promise of better things to come"... or worse.

It's Harlem, 4 in the morning, and gambling Joe Pullen's wake is going with a swing. Then all hell breaks loose. A preacher plummets from a 3rd story window. A young black man steals a bag of money, and Valentine Haines is found stabbed through the heart. What a Crazy kill!