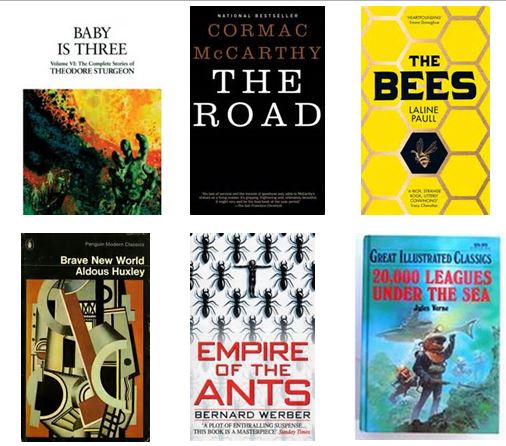 The story of Baby is Three describes the creation and "bleshing" of a new life form, Homo Gestalt, on Earth. It is formed by the symbiosis of four or more humans with paranormal abilities. One person, the "head" of the organism, assembles and directs the various parts through telepathy, another is the "hands" of the organism, able to move and change physical objects by telekinesis, the third and fourth persons are twins able to teleport at will, and the fifth person of the organism is a silent baby with Down's syndrome with a brain like a computer and who acts as the "brain".

The book contains other stories by Sturgeon, a famous American science-fiction author.

The Road is a 2006 novel by American writer Cormac McCarthy. It is a post-apocalyptic tale of a journey of a father and his young son over a period of several months, across a landscape blasted by an unspecified cataclysm that has destroyed most of civilization and, in the intervening years, almost all life on Earth.

The Bees tells the story of Flora 717 is a worker bee born into the lowest caste of her totalitarian hive society. Though prepared to sacrifice everything for the Queen and work herself to death, she is a survivor who escapes internal massacres, religious purges, and can even successfully confront a huge marauding wasp. With each act of bravery her status grows, revealing both the enemies within, and the sinister secrets that rule the hive. But when Flora’s devotion to a life of service is overwhelmed by fierce and forbidden maternal love, she must break the most sacred law of all, and embark on a collision course with everything she holds most dear.


The plot of the Empire of the Ants begins as two stories that take place in parallel: one in the world of humans, the other in the world of ants. The human character receives a house and a provocative message as legacy from his recently deceased uncle. He begins to investigate his uncle's life and mysterious activities, and decides to descend into the cellar of the house but does not return. His family and other people follow, and disappear...

During the year 1866, ships of several nations spot a mysterious sea monster, which some suggest to be a giant narwhal. Professor Pierre Aronnax, a French marine biologist and narrator of the story receives a last-minute invitation to join an expedition to chase the beast, which he accepts. Canadian whaler and master harpoonist Ned Land and Aronnax's faithful servant Conseil are also brought aboard.

The expedition departs Brooklyn aboard the United States Navy frigate Abraham Lincoln and travels south around Cape Horn into the Pacific Ocean. The ship finds the monster ... which they find, to their surprise, to be a submarine!
Disney's 20.000 leagues under the sea trailer