Danny is only five years old, but he is a 'shiner', aglow with psychic voltage. When his father becomes caretaker of an old hotel, his visions -the shining- grow out of control.

Cut off by blizzards, the hotel seems to develop an evil force, and who are the mysterious guests in the supposedly empty hotel ?

The Simpsons' parody where
"all work and no play make Jack a dull boy"
becomes "no TV and no beer make Homer go crazy".

Kerstin Kvist enters crumbling Lydstep Old Hall to live with the Cosways and to act as nurse to John: a grown man fed drugs by his family to control his lunatic episodes.

But John's strangeness is grotesquely mirrored in that of his four sisters who roam the dark, mazy Essex country house under the strict gaze of eighty-year-old Mrs Cosway.

However not everybody wants John to feel better but  beware of the "maze" within Lydstep Old Hall because what you may find is The minotaur. 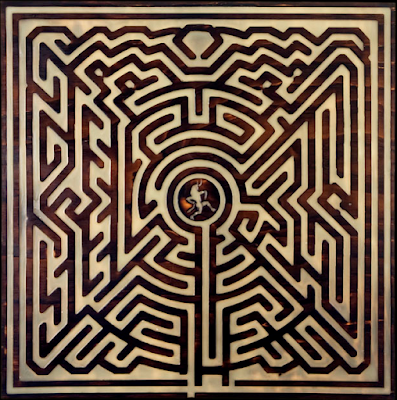 The horror in the museum is a collection of frightful stories: a wax museum in London boasts a new exhibit, which no man has seen and remained sane… A businessman is trapped in a train carriage with a madman who claims to have created a new and efficient method of capital punishment… A doctor plans a horrible revenge, using as his murder weapon an insect believed capable of consuming the human soul…

Within these pages, some of H P Lovecraft's more obscure works of horror and science fiction can be found, including several fantastic tales from his celebrated Cthulhu Mythos. No true Lovecraft aficionado dare be without this volume.

The Devil's Dictionary is a satirical dictionary written by American journalist and author Ambrose Bierce. Originally published in 1906 as The Cynic's Word Book, it features Bierce's witty and often ironic spin on many common English words.