The Librarian's Choice: From books to flicks

how many novels have been adapted for the cinema or the television? An unfathomable number for sure but does it always worth it? Can a director restitute the atmosphere of the novel? Does it matter and what about the film being "better" than the book?

In April, BDX-USA invites you to borrow the books and the films adapted from them, if you wish to make a comparison. Watch first the movie so that you can more easily understand the printed story or let yourself surprised by the flick after you read the book. It's up to you.

Books and DVDs are on display in the foyer of BDX-USA on the right as you come in. 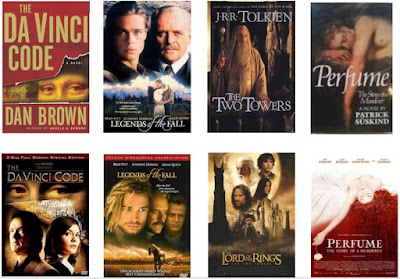 Professor Langdon, a renown specialist in symbology from Harvard is summoned to go to the Louvres to examine pictograms in relation with Da Vinci's works.

By deciphering the code, he unveils one of the greatest mystery of our times ... and some people want it to remain secret.


The title novella, “Legends of the Fall" is an epic, moving tale of three brothers fighting for justice in a world gone mad. Moving from the raw landscape of early twentieth-century Montana to the blood-drenched European battlefields of World War I and back again to Montana.
Harrison’s powerful story explores the theme of revenge and the actions to which people resort when their lives or goals are threatened, painting an unforgettable portrait of the twentieth-century man.

The Two Towers is the second volume ofJ.R.R. Tolkien fantasy novel The Lord of the Ring. It is preceded by The Fellowship of the ring and followed by The Return of the King.
If the movie franchise is stunning with its breathtaking sceneries (it was shot in New Zeland), the book was no less entralling too. Through description and an imagination of hs own, Tolkien makes you travel through an enchanted land and discover his metaphorical view in life in the process.

Perfume, the Story of a Murderer written by Patrick Süskind
& adapted by Tom Tikwer

"In eighteenth-century France there lived a man who was one of the most gifted and abominable personages in an era that knew no lack of gifted and abominable personages. His story will be told here. His name was Jean-Baptiste Grenouille, and if his name-in contrast to the names of other gifted abominations, de Sade's, for instance, or Saint-Just's, Fouché's, Bonaparte's, etc.-has been forgotten today [...] (it's) because his gifts and his sole ambition were restricted to a domain that leaves no traces in history: to the fleeting realm of scent." Thus does the novel start.

Süskind did a great job describing the thousands of smells, whatever they're fine perfumes or pungean pongs. Grenouille will pursue an amoral quest travelling around France to "catch and store" scents, well one particular scent, the one exsuded by young  maid with a flamboyant mane.