Dear all,
December is soon and it's a time of cold and flu. But you may also succumb to janeistism. What's that? Some people became Jane Austen fanatics after reading her novels and here is a selection of books to discover the author and her world.
If some think it's soppy, others state she really understood the complexity of human Relationship during the Regency. 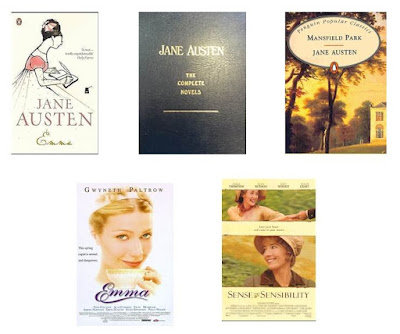 Emma Woodhouse is content with her life and sees no need for marriage. Nothing, however, delights her more than interfering in the romantic lives of others.

But when she ignores the warnings of Mr Knightley and attempts to arrange a suitable match for her protegee Harriet Smith, her plans soon unravel and have consequences that she never expected.
Before she began the novel, Austen wrote, "I am going to take a heroine whom no one but myself will much like."

In Mansfield Park, Austen gives us Fanny Price, a poor young woman who has grown up in her wealthy relatives' household without ever being accepted as an equal. The only one who has truly been kind to Fanny is Edmund Bertram, the younger of the family's two sons.

Into this Cinderella existence comes Henry Crawford and his sister, Mary, who are visiting relatives in the neighborhood. Soon Mansfield Park is given over to all kinds of gaiety.

Yet these two charming, gifted, and attractive siblings gradually reveal themselves to be lacking in one essential Austenian quality: principle. Without good principles to temper passion, the results can be disastrous...

But sensible and principled somewhat priggish Fanny will know how to put order into the chaos. 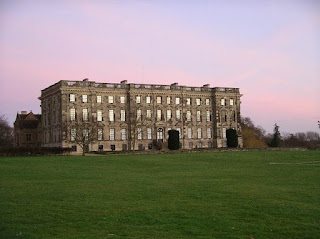 Stoneleigh Abbey, one of the country estates J. Austen might have in mind


when creating fictional Mansfield Park.
Though not the first novel she wrote, Sense and Sensibility was the first Jane Austen published.
Though she initially called it Elinor and Marianne, Austen jettisoned both the title and the epistolary mode in which it was originally written, but kept the essential theme: the necessity of finding a workable middle ground between passion and reason.

The story revolves around the Dashwood sisters, Elinor and Marianne. Whereas the former is a sensible, rational creature, her younger sister is wildly romantic--a characteristic that offers Austen plenty of scope for both satire and compassion.

Soon however, Marianne meets a man who measures up to her ideal: Mr. Willoughby, a new neighbor. So swept away by passion is Marianne that her behavior begins to border on the scandalous. Then Willoughby abandons her; meanwhile, Elinor's growing affection for Edward suffers a check.