Hello everyone,
look what treasure I discovered on our shelves: 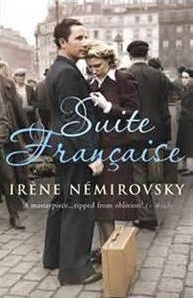 The movie has been in the cinemas recently, apparently to high acclaim.

The book in itself has a story unlike others. Irène Némirovsky began writing Suite Française in 1940, but her death in Auschwitz prevented her from seeing the day, sixty-five years later, that the novel would be discovered by her daughter and hailed worldwide as a masterpiece.
Similar to the Diary of Anne Frank, it is impossible to read the book without being aware of what the author went through.

Set during the year that France fell to the Nazis, Suite Française falls into two parts. The first is a brilliant depiction of a group of Parisians as they flee the Nazi invasion; the second follows the inhabitants of a small rural community under occupation. Suite Française is a novel that teems with wonderful characters struggling with the new regime.
However, amidst the mess of defeat, and all the hypocrisy and compromise, there is hope. True nobility and love exist, but often in surprising places.


Enjoy this as well as many other treasures on the display table.
Your Librarian Anna