I got some goodies for you – all hot new releases that everyone is talking about! 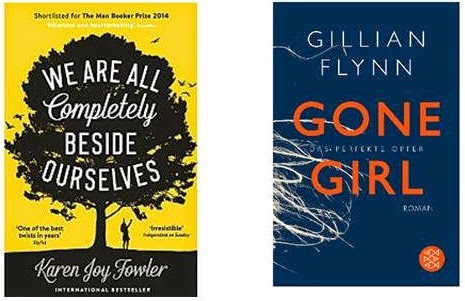 We start with a book shortlisted for the Man Booker Prize 2014: We Are All Completely Beside Ourselves by Karen Joy FowlerRosemary's young, just at college, and she's decided not to tell anyone a thing about her family. So I'm not going to tell you too much either: you'll have to find out for yourselves, round about page 77, what it is that makes her unhappy family unlike any other.


Rosemary is now an only child, but she used to have a sister the same age as her, and an older brother. Both are now gone - vanished from her life. There's something unique about Rosemary's sister, Fern. So now she's telling her story: full of hilarious asides and brilliantly spiky lines, it's a looping narrative that begins towards the end, and then goes back to the beginning. Twice.


I started with really low expectations. I'm never a fan of book competitions; the concept of attempting to rank books objectively seems futile to me. The start of the book is amusing and I could easily integrate the reading into my busy day. Until page 77. “What”, I asked, “what?!” It is a simple, implausible, ingenious idea. It is based on facts. It is nothing you have ever come across - rare delight- and I was gripped and became so emotionally involved that my heart ached at the end. I found it extremely hard picking up another book once I had finished this one. I literally mourned for a day that the book had ended. Fowler's style of writing is a pleasure.


I dare you to not finish the book in one sitting.

Another summer bestseller I picked up for you is Gone Girl by Gillian FlynnWho are you?
What have we done to each other?


These are the questions Nick Dunne finds himself asking on the morning of his fifth wedding anniversary, when his wife Amy suddenly disappears. The police suspect Nick. Amy's friends reveal that she was afraid of him, that she kept secrets from him. He swears it isn't true. A police examination of his computer shows strange searches. He says they weren't made by him. And then there are the persistent calls on his mobile phone. So what really did happen to Nick's beautiful wife?

Except this plot is only the starting point of examining the screws and bolts of a relationship and a less than harmonious marriage. It's an entertaining book. There is a lot of suspense. I smiled often and nodded my head. I couldn't put it down. I promise you will finish it over a weekend but you will not feel compelled to call in sick at work Monday morning.

There are several twists and truths involved and Hollywood is now releasing a movie starring Ben Affleck as the husband – yummy!

Enjoy - there are more treasures in store for you next week.
Sincerely yours
Anna, your Librarian