Are you at home right now feeling depressed and melancholic after such a cold and rainy weekend? This need not be!
Come to our library and warm your minds with our many treasures... 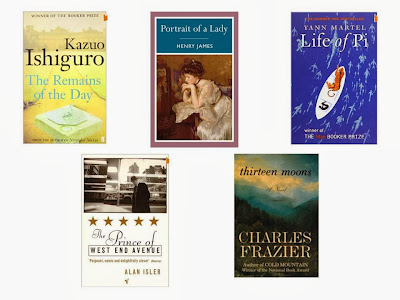 Remains Of The Day by Kazuo Ishiguro – Winner of the Booker prize.
In the summer of 1956, Stevens, the ageing butler of Darlington Hall, embarks on a leisurely holiday that will take him deep into the countryside and into his past. A beautiful and haunting evocation of life between the wars in a Great English House, of lost causes and lost love.


Portrait Of ALady by Henry James.First published in 1881, it is one of the great American Classics. Set in England and Italy, The Portrait of a Ladyis the story of a spirited young American woman, Isabel Archer, who challenges the destiny expected of her and desires to shape her own future.


Newest Arrival
The latest and proudest donation to our library is Life Of Pi by Yann Martel.
A fantasy adventure novel, coming soon to a cinema near you, explores issues of spirituality and childhood with humor and tenderness. A shipwreck survivor stuck in a life boat facing a bengali tiger. And it goes on from there...

Discover the Treasure
Here are two of my all time favorite books – whenever I re-read them I discover different truths about life. What will you discover?

13 Moons by Charles Frazier
Set in the American West, written with great power and beauty by a master of American fiction, Thirteen Moons is a stunning novel about a man's passion for a woman, and how loss, longing and love can shape a man's destiny over the many moons of a life.
At the age of twelve, under the Wind Moon, Will is given a horse, a key, and a map, and sent alone into the Indian Nation to run a trading post as a bound boy. It is during this time that he grows into a man, learning, as he does, of the raw power it takes to create a life, to find a home. In a card game with a white Indian named Featherstone, Will wins - for a brief moment - a mysterious girl named Claire, and his passion and desire for her spans this novel. As Will's destiny intertwines with the fate of the Cherokee Indians, including a Cherokee Chief named Bear, he learns how to fight and survive in the face of both nature and men, and eventually, under the Corn Tassle Moon, Will begins the fight against Washington City to preserve the Cherokee's homeland and culture. And he will come to know the truth behind his belief that 'only desire trumps time'.


Prince of West End Avenue by Alan Isler
A bittersweet comedy set in a Jewish Old People's home in New York, this is a comical and poignant story.
Comedy and tragedy combine as our hero. Otto Korner, directs his quirky, libidinous fellow residents in a chaotic production of HAMLET and looks back over his adventures in Germany, Zurich - where he met Lenin and inadvertently invented Dada - Auschwitz and America.


(Go on, look up “poignant”, already you've learned something new on a dreary Sunday evening